I noticed that the <monospaced> tag (accessible via Format -> Font effects -> Monospaced ) doesn’t necessarily produce monospaced text if the input string is a mix of letters and numbers. The <verbatim> tag seems more appropriate, although it does so by utilizing an explicitly monospace font. I imagine this quirk of the <monospaced> Font Effect stems from the fact that spacing between characters must be dynamically generated as a function of whichever font is selected. In the examples below, I used the default Roman font. 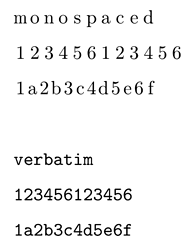 So, this isn’t necessarily a bug of <monospaced>. I just wanted to let others know in case they run into the same problem. I encountered it while experimenting with style macros to display hexadecimal PGP fingerprints in my Notable Public Keys book I’m making.